Sexuality at the Nexus of Race, Gender, and Statistics

Preview of the text:

Coming of age as a bisexual Latina femme in the 1980s, I was surrounded by lesbian-feminist communities and discourses that disparaged, dismissed, and vilified bisexuality. Those of us that enthusiastically embraced femininity or that actively sought out masculine presenting butches, were deemed perpetually suspect. Femmes were imagined as being always on the verge of abandoning the lesbian-feminist communities that nurtured us for the respectability and privilege that heterosexual relations might afford. The label bisexuality, for those that dared to claim it, was viewed as the apolitical cop-out for those that were not radical enough to fully commit to the implied lesbian practice of feminist theory. In the bad old days of lesbian separatist politics, bisexuality was attached to a yearning, not just for men, but for multifarious sexual pleasures deemed decidedly anti-feminist including desires for penetration, sexual dominance and submission, and the wickedly perverse delights of expressive gender roles. Decades later, discursive practices have shifted. 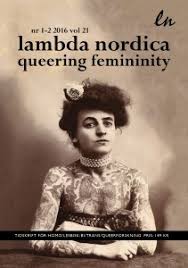